November 21, 2015November 18, 2017 Comments Off on ISIS issues anti-hacking guidelines for its online supports after Anonymous threats 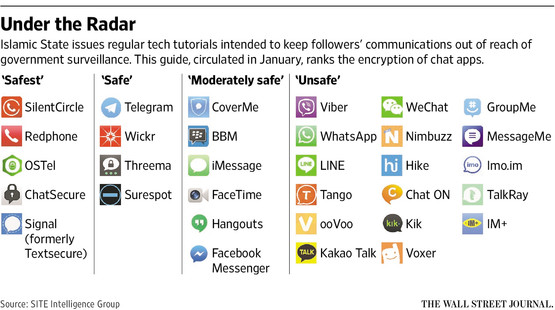 The Islamic State militant ISIL who have claimed responsibility for the Paris terror attacks, responded to Anonymous’ declaration of “total war,” calling the hacker group “idiots” while offering guidance to its online followers to prevent cyberattacks.

The move followed when on Monday, a member of hacktivist collective Anonymous declared war on the IS, also identified as Daesh, ISIS and ISIL declaring cyber-war on the Islamic State in response to attacks in Paris that killed at least 129 people.

An announcer wearing a Guy Fawkes mask and speaking in French said in a two-minute video: “War is declared. Get prepared. Anonymous from all over the world will hunt you down. You should know that we will find you and we will not let you go. We will launch the biggest operation ever against you. The French people are stronger than you and will come out of this atrocity even stronger.”

In response to the threat, the militant group, communicated via a channel on Telegram, an encrypted instant messaging app, on the Khilafah news channel, which is thought to be an unofficial pro-ISIS news source. Researchers at the International Centre for the Study of Radicalisation discovered this, which is a London think tank that studies terrorism and extremism.

Nick Kaderbhai, a research fellow from the think tank told the Huffington Post UK, “Anyone can subscribe to it (technically) however the more IS channels you subscribe to the more open you are to investigation.”

The militant group has warned its followers to not open any website links unless they are sure of the source. The group also warned followers to avoid talking on Telegram or through Twitter direct messaging and to change Internet protocol addresses continually.

“The #Anonymous hackers threatened in new video release that they will carry out a major hack operation on the Islamic state (idiots),” the statement, posted in Arabic and English, read in part.

“What they gonna hack?,” the IS said, noting Anonymous’ hacks have been limited to IS-affiliated Twitter accounts and email.

They have also allegedly issued five points of guidance to their members on how to avoid being hacked.

Instructions included warnings to use VPN, a tool to change IP address constantly and to make the user’s location online. It also told members to avoid using direct messages on Twitter, because is is open to hackers.

“Do not make your email same as your username on Twitter this mistake cost many their accounts…so be careful,” it read.

The hacker collective launched its anti-Islamic State online campaign, called #OpISIS, after the Charlie Hebdo massacre in Paris last January and the group consists of coders, unrelated volunteers, and activists from around the world.

To date, according to an in-depth investigation by Foreign Policy, they have taken down 149 Islamic State-related websites and exposed 101,000 Twitter accounts and 5900 propaganda videos.

Anonymous has a history of launching cyber attacks against entities with which it disagrees. PayPal, Mastercard and the Church of Scientology are among the victims of its attacks.

In January, following the killing of 12 people at the Paris-based magazine Charlie Hebdo, they had temporarily taken down a French jihadist website. The attackers identified themselves as members of al-Qaida’s Yemen branch.

The hackers earlier this month identified 1,100 alleged members of the Ku Klux Klan, posting the names on its website. Earlier in November, it also organized a worldwide protest, known as the Million Mask March.