JARVIS is Iron Man’s personal assistant. With the help of a few windows utilities we can create our own JARVIS system. 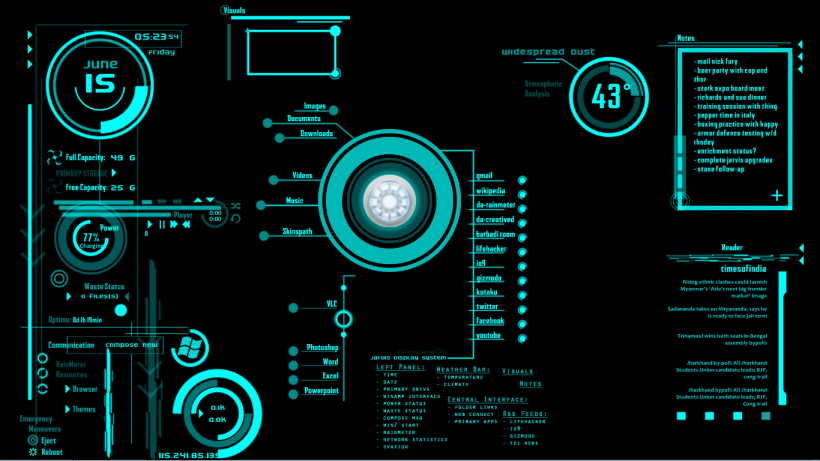 Here are the essential things you will need:

This is the very basic step of what we’re going to do. You have to configure Windows Speech Recognition so that you can execute the basic commands by speaking.

Windows Speech Recognition will guide you through the commands and in the meantime, also train your computer to understand your voice better. So, after you take the tutorial, you will notice that your system understands your commands better than anyone else’s. Awesome, isn’t it?

I gave the link to the tutorial before itself. Make sure that you read it, and take time learning the basics. The more you accustom yourself to the commands, the better you can command your system.

It took me almost half an hour to complete this step on my desktop, but it was well worth it, because all the basic commands can be executed by me just by speaking!

You now know all the basic commands and now can control your computer with your voice. Use it and get more and more familiar with it.Remember that, whenever you are stuck, you can say “What can I say?” and your system will show up the list of the commands and their consequences.

Now we have to install the Windows Speech Recognition Macros.

The installation file is found in the files you recently downloaded. Install Windows Speech Recognition Macros using that setup file.

You just have to click on the “Install” button and your software will be ready!

Now, open Windows Speech Recognition Macros and you will soon find the icon in the Notification Area of the taskbar.

Now here you have a variety of options. Basically, Windows Speech Recognition is meant to create your own commands with specific actions. We can’t be satisfied with the basic functions only right?

Here are the alternatives you have, explained in brief:

Insert Text: Suppose if you use Microsoft Word through Speech Recognition and don’t want to type your address again, you can set a specific phrase for your address and whenever you say that phrase, your address would by typed automatically.

Run a Program: There are default commands such as “Start WordPad” and “Start Notepad” for WordPad and Notepad respectively. There are commands for some other programs too! But what about the rest? This option can allow you to execute any program, maybe your favourite game by just speaking!

Send Keystrokes: Take a situation where you want to select all the text and copy it into the clipboard. Can you do it by just speaking? Oh yes, why not? This option allows you to add phrases for different keystrokes such as Ctrl+A and Ctrl+C!

Emulate Recognition: This is for the commands already supported by Windows Vista Speech Recognition.


Advanced: There are certain complex commands that we would like our JARVIS to do. However, this requires brief knowledge of XML. I have explained some of the commands you can use below:

<speechMacros> – This is just a starting tag. This indicates that the code is actually for Windows Speech Recognition Macros.<command> – This, in short words, is the command to be executed. Sometimes your demands are fulfilled with just a single command. However, in some cases you would need more than one command too!

<listenFor></listenFor> – Whatever you are going to speak is supposed to be written between these two tags. Don’t forget the close tag else your code will not work.

<speak></speak> These tags should include the text your system is supposed to speak after listening to your command.

</command> – This is the closing tage of <command> tag. XML is like HTML. It has both opening and closing tags for every element, with a few exceptions.

Now, I will show you some examples to explain it better.

But before that, I want to tell you that it is extremely important to digitally sign your macros! So before creating every single macro, you have to create a signing certificate! Every macro will need one certificate.

For creating a signing certificate, right click the Windows Speech Recognition icon in the notification pane, then go to Security, then press “Create Signing Certificate”.

Suppose if you want your computer to greet you when you command it to wake up, you can use the below Macros:

I love this one the most!

Here is a Macro for getting the weather. You can see that it’s a bit complicated to understand. But no worries! You just have to copy this macro and replace the text in bold with the desired details.

Woah! What a lengthy piece of code. If you aren’t much into this coding stuff, I would suggest you to leave the above macro.

This is a Macro for restarting your computer. Simply say “Restart JARVIS” and your system will restart!

Here is a Macro for shutting down your system. Say “Goodbye JARVIS” and your system will shut down!

If you want your system to tell you the time, use this macro:

Likewise, if you want your system to tell you the date, use the below macro:

Suppose you have just opened a file or a folder and you want to delete it, simply use the below macro:

The last one! Want to empty your recycle bin? The below macro is to the rescue:

Did I horrify you with too many codes! Note that NONE OF THE CODES GIVEN HERE ARE MANDATORY and you can always skip or modify any piece of code! After all, your system, your rules!

You’re very near! You just have to install these – Rainmeter and Iron Man Theme, both of which are provided in the files.Rainmeter will do the job of supporting your theme and providing it with a base.

Now, change your desktop background (Wallpaper) to the image provided in the files or download your own.

You now have to load the theme skins. You have four colors to choose from – Blue, Green, Red and Yellow. While I like blue, it’s completely up to you for which to choose!

Simply load the skins of the color you have chosen. Click on the skin and press “Load” button. This is shown in the image given below:

You will notice that all the elements will be found at just one place. Rearrange them the way you like and Voila! Your system really looks like JARVIS now!

But hold on! Your desktop icons are still visible and that ruin the look. There’s a solution for that too!

Look at the below image for reference:

You can add more widgets to improve the look and creating your own unique JARVIS style.