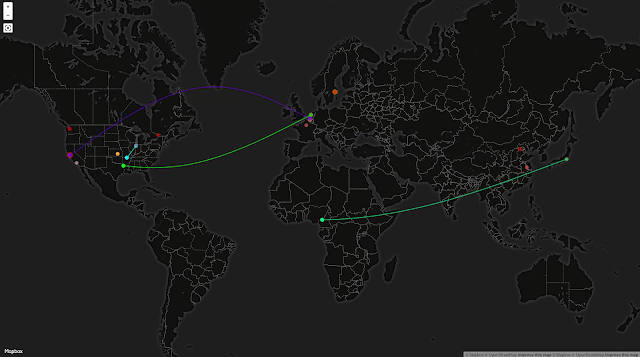 This geoip attack map visualizer was developed to display network attacks on your organization in real time. The data server follows a syslog file, and parses out source IP, destination IP, source port, and destination port. Protocols are determined via common ports, and the visualizations vary in color based on protocol type. CLICK HERE for a demo video. This project would not be possible if it weren’t for Sam Cappella, who created a cyber defense competition network traffic visualizer for the 2015 Palmetto Cyber Defense Competition. I mainly used his code as a reference, but I did borrow a few functions while creating the display server, and visual aspects of the webapp. I would also like to give special thanks to Dylan Madisetti as well for giving me advice about certain aspects of my implementation.
Important
This program relies entirely on syslog, and because all appliances format logs differently, you will need to customize the log parsing function(s). If your organization uses a security information and event management system (SIEM), it can probably normalize logs to save you a ton of time writing regex. 1. Send all syslog to SIEM. 2. Use SIEM to normalize logs. 3. Send normalized logs to the box (any Linux machine running syslog-ng will work) running this software so the data server can parse them.