May 19, 2017 Comments Off on WikiLeaks Reveals Athena CIA Spying Program Targeting All Versions of Windows
WikiLeaks has published a new batch of the ongoing Vault 7 leak, detailing a spyware framework – which “provides remote beacon and loader capabilities on target computers” – allegedly being used by the CIA that works against every version of Microsoft’s Windows operating systems, from Windows XP to Windows 10.

Dubbed Athena/Hera, the spyware has been designed to take full control over the infected Windows PCs remotely, allowing the agency to perform all sorts of things on the target machine, including deleting data or uploading malicious software, and stealing data and send them to CIA server.

The leak, which includes a user manual of Athena, overview of the technology, and demonstration on how to use this spyware, reveals that the program has two implications:

According to the whistleblower organization, Athena has the ability to allow the CIA agents to modify its configuration in real time, while the implant is on target “to customize it to an operation.”

“Once installed, the malware provides a beaconing capability (including configuration and task handling), the memory loading/unloading of malicious payloads for specific tasks and the delivery and retrieval of files to/from a specified directory on the target system,” WikiLeaks claims.

The leaked documents suggest that Athena, written in Python programming language, was developed in August 2015, just a month after Microsoft released its Windows 10 operating system.

Interestingly, one document also suggests that the CIA agents have been advised to make sure that the spyware should not get caught by antivirus software programs, especially Kaspersky AV software. 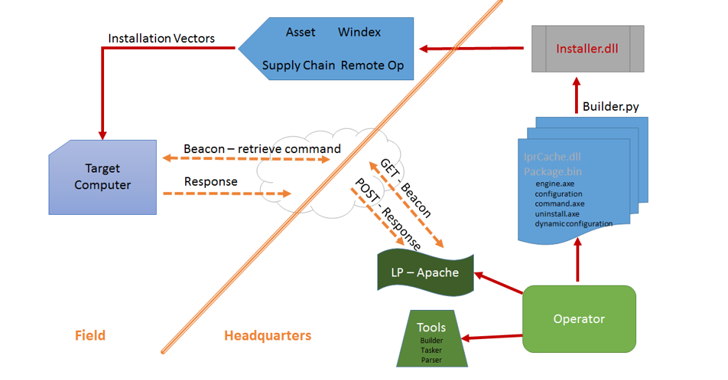 However, WikiLeaks has not provided any detail about the operations being conducted by the agency using Athena, but it is not hard to imagine how the intelligence agency would be using this program to spy on their targets.

Last week, WikiLeaks dumped two apparent CIA malware frameworks – AfterMidnight and Assassin – for the Microsoft Windows platform that has been designed to monitor and report back actions on the infected remote host computer and execute malicious actions.

Since March, the whistleblowing group has published nine batches of “Vault 7” series, which includes the latest and last week leaks, along with the following batches: