SSH was designed as a replacement for Telnet and for unsecured remote shell protocols such as the Berkeley rlogin, rsh, and rexec protocols. Those protocols send information, notably passwords, in plaintext, rendering them susceptible to interception and disclosure using packet analysis. The encryption used by SSH is intended to provide confidentiality and integrity of data over an unsecured network, such as the Internet, although files leaked by Edward Snowden indicate that the National Security Agency can sometimes decrypt SSH, allowing them to read the contents of SSH sessions.

On 6 July 2017 the government transparency organization WikiLeaks confirmed that the US Central Intelligence Agency had developed tools that can be installed on computers running Microsoft Windows or GNU/Linux operating systems to intercept SSH connections started by SSH clients on the compromised systems.

Here we have listed the best tricks that all hackers should know.

Of course, we use SSH to login remotely:

And, if needed, we can specify a different port:

Sometimes, if we have a lot of SSH keys in our ~/.ssh directory, we’ll often find that SSHing into servers with the intent of using a password results in a “too many authentication attempts” error. If we need to log into a server with a password, we can attempt to force password-based login. This will stop SSH from attempting to use your SSH keys first:

If you use AWS, and in other cases, you might get a PEM file to use as an identity. In this case, you might need to specify a specific identity file to use when logging in. We can do this with the -i flag:

You may need to set your permissions on the pem file so only the owner can read/write/execute it: chmod 0600 identity.pem or chmod u+rw identity.pem && chmod go-rwx identity.pem

If you want to setup aliases for servers you access often, you can create an ~/.ssh/config file and specify each server you log into, along with the authentication method to use:

So, there’s a few example entries you might find in the ~/.ssh/config file (you can have as many entries as you’d like).

Using a defined host (“alias”) is as easy as this:

Let’s cover the options used above:

SSH can be used for tunneling, which is essentially port forwarding. There’s a few ways we can do this – Local (Outbound), Remote (Inboud), and some others (Dynamic and Agent Forwarding).

Local port forwarding is what you use when you need to tunnel through a server’s firewall or other limitation.

A common example is attempting to connect to a remote database which is either behind a firewall or is only listening to local connection. For example, MySQL only listens to localhost connections by default. You can’t remotely connect to it without editing the my.cnf file and have it listen on all networks. There’s also a firewall preventing you connecting to MySQL’s port 3306 anyway.

Remote means any computer that isn’t yours, which includes virtual machines (guests) inside of your host computer

Assuming we have SSH access to the remote server, we can get around this by creating a tunnel into the server. What might that look like?

Let’s go over this:

I can then use my local client to connect to the remote server as if it’s a local one: 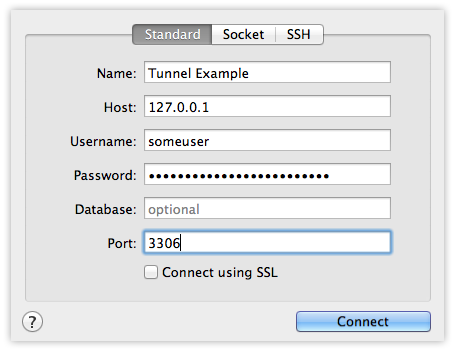 Now, I used the same port locally and remotely, but I could have specified a different local port to use:

Then my local mysql client would have to connect to port 3307, which would still tunnel to the remote server’s local 3306: 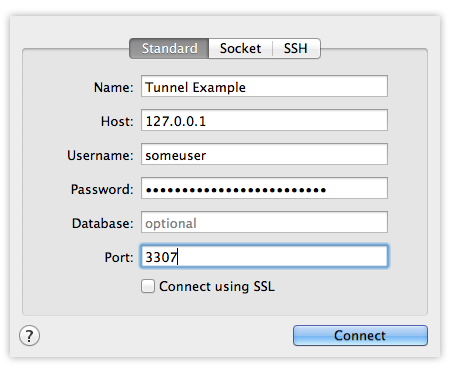 Remote Port Forwarding is good if you need to share your local computer with others who are outside of your network.

To do this, we need a remote server all parties can reach. Something like a AWS or Digital Ocean server will do.

First, let’s pretend our local computer has a web server running on port 8001:

We want our friends to see our website, which simply says “Hi!”. Let’s use a remote server to forward requests to our local computer:

Let’s go over this command:

Note: To accomplish this, your remote server’s firewall must not block port 9000. You may also need to edit /etc/ssh/sshd_config and set the GatewayPorts directive to yes. (Don’t forget to restart SSH after any changes to sshd_config).

You can run commands remotely using SSH as well – in fact, this might be the easiest “trick” for using SSH.

When you run a command using SSH, you’re running the command on the remote server. However, any resulting output will be displayed in your terminal.

Let’s just run some simple commands on a remote server. The following will run pwd command. We’ll see that it returns the default folder that we would be in after logging in. The we’ll run the ls command to see the directory’s output:

This is actually the basis of how some server provisioning tools work. In fact, Ansible is very similar – it will run commands over SSH on groups of servers (in series and in parallel).

Let’s see how that works on Ubuntu really quickly.

First install Ansible on a server that will be doing provisioning (not the one being provisioned):

Then, configure one or more servers in the /etc/ansible/hosts directory:

Save that file and then let’s run a command on all three servers!

This will run “ping” on each server. You’ll get some JSON output saying if they were successful or not.

The flags of that command:

You can actually run any command using the “shell” module:

Here, the -a "apt-get install nginx will run the given command using the “shell” module.

Let us know in comments below if you have any other cool SSH tricks!

EvilTree – A Remake Of The Classic "Tree" Command With The Additional Feature Of Searching For User Provided Keywords/Regex In Files, Highlighting Those That Contain Matche