Dockernymous is a start script for Docker that runs and configures two individual Linux containers in order to act as an anonymization workstation-gateway set up.

The gateway container acts as a Anonymizing Middlebox (see https://trac.torproject.org/projects/tor/wiki/doc/TransparentProxy) and routes ALL traffic from the workstation container through the Tor Network.

The idea was to create a whonix-like setup (see https://www.whonix.org) that runs on systems which aren’t able to efficiently run two hardware virtualized machines or don’t have virtualization capacities at all. 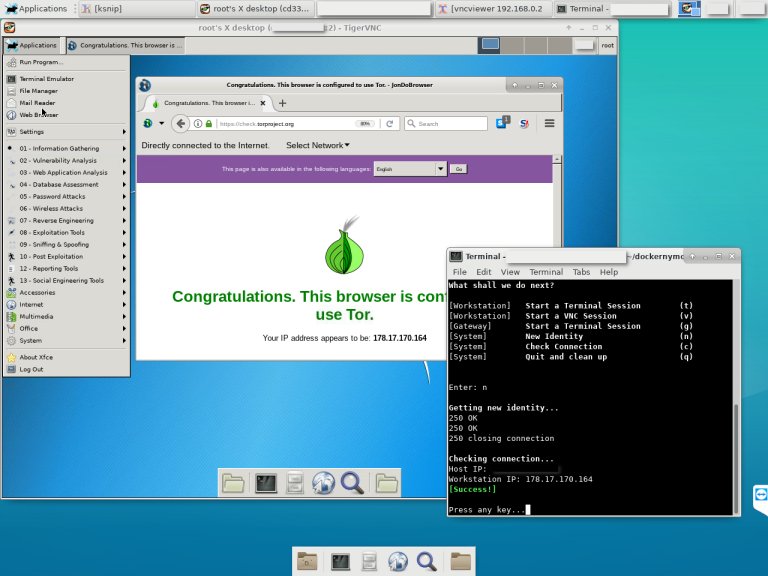 To clone the dockernymous repository type:

Dockernymous needs an up and running Docker environment and a non-default docker network. Let’s create one:

Get a lightweight gateway Image! For example Alpine:

Feel free to further customize the gateway for your needs before you extit.

To make this permanent you have to create a new image from the gateway container we just set up. Each time you run dockernymous a new container is created from that image and disposed on exit:

Get the container ID by running:

Get an image for the Workstation. For example, Kali Linux for penetration testing:

Update and install the tools you would like to use (see https://www.kali.org/news/kali-linux-metapackages/).

Make sure the tightvncserver and curl packages are installed which is the case with most Kali Metapackages.

As with the Gateway, to make this permanent you have to create an image from that customized container. Each time you run dockernymous a new container is created and disposed on exit.

Get the container ID by running:

4. Run dockernymous In case you changed the names for the images to something different (defaults are: “docker_internal” (network), “my_gateway” (gateway), “my_workstation” (you guess it)) open dockernymous.sh with your favorite editor and update the actual names in the configuration section.

Everything should be set up by now, let’s give it a try! Run Dockernymus (don’t forget to ‘cd’ into the cloned folder):

or mark it executable once:

and always run it with:

Dockernymous is in a very early state of development. Only use it for educational purposes.

DON’T use it if you rely on strong anonymity!