Slackor – A Golang implant that uses Slack as a CC2 Server

July 9, 2019 Comments Off on Slackor – A Golang implant that uses Slack as a CC2 Server

A Golang implant that uses Slack as a command and control channel.

This project was inspired by Gcat and Twittor that uses the same implementation but with different platforms. 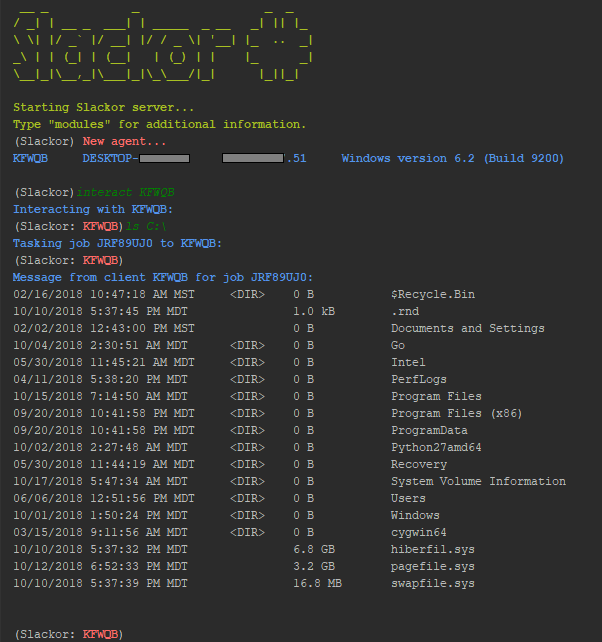 This tool is released as a proof of concept. Be sure to read and understand the Slack App Developer Policy before creating any Slack apps.

Note: The server is written in Python 3

For this to work you need:

After running the script successfully, a file agent.exe will be created. It will be a 64bit Go binary packed with UPX.

After starting server.py on a Linux host, execute agent.exe on your target Windows host.

Run the “stager” module to generate a one-liner and other droppers.

This will execute InvokeWebRequest(PS v.3+) to download the payload, execute it using a LOLBin, and then delete itself once killed. This is a working example but the command can tweaked to use another download method or execution method.

Type “help” or press [TAB] to see a list of available commands. type “help [COMMAND]” to see a description of that command.

Once an agent checks in, you can interact with it. Use “interact [AGENT] to enter into an agent prompt. Type “help” or press [TAB] to see a list of available commands.

Modules will warn you before performing tasks that write to disk.
When executing shell commands, take note that cmd.exe will be executed. This may be monitored on the host. Here are several OPSEC safe commands that will NOT execute cmd.exe:

Is this safe to use for red teams/pentesting?

Yes, given some conditions. While the data is encrypted in transit, the agent contains the key for decryption. Anyone who acquires a copy of the agent could reverse engineer it and extract the API keys and the AES secret key. Anyone who compromises or otherwise gains access to the workspace would be able to retrieve all data within it. For this reason, it is not recommended to re-use infrastructure against multiple organizations.

The implant does not have in-memory password dumping functionality. If you need logonPasswords, you can try the following:

THis will automically extract passwords with Pypykatz. Alternatively, you can use Mimikatz on Windows.

Not yet. It has not been fully tested on a variety of systems. The server was designed to run on Kali Linux and the agent on Windows 10.

How well does it scale?

Scalability is limited by the Slack API. If you have multiple agents, consider increasing the beacon interval of beacons not in use.

Is it vulnerable to standard beacon analysis?

Currently each beacon has 20% jitter built in, and beacon times can be customized. Agent check-in request and response packets will be about the same size each time as long as no new commands are recieved.

I tried my best. PRs are encouraged 🙂

It gets caught by AV!

The built-in HTA stager is created by SpookFlare which is based on Demiguise. If you want your droppers to not get snagged you probably want to go custom. The built in droppers are just there to get you started.